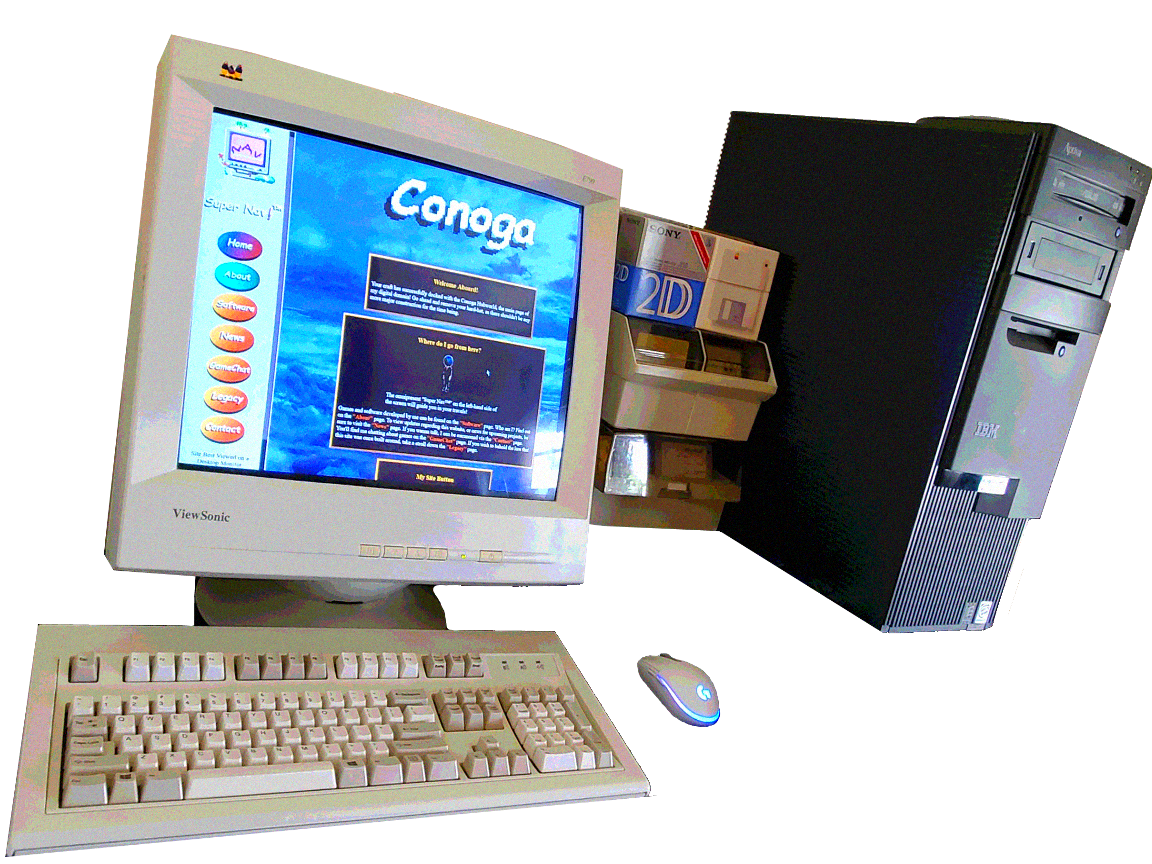 What you are beholding here is what I've collectively called "Operation Pentium". The CRT monitor is a Viewsonic E790. It was manufactured in March of 1999 and has a native resolution of 1280x1024 (and an 85hz refresh rate!). It is connected to my modern PC through the magic of an HDMI-to-VGA adapter. Not a pure analog connection, but I can't tell the difference. The keyboard is a Unicomp keyboard, which are mechanical keyboards forged from the same mold as the old IBM Model M keyboards. 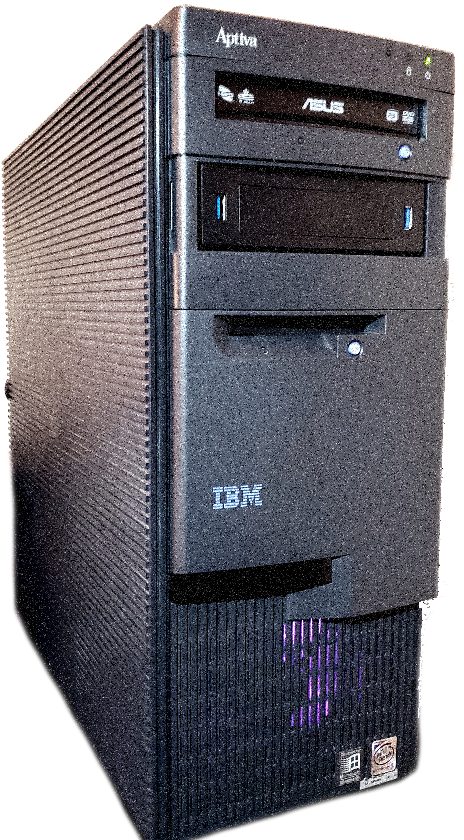 This is the most important part of Operation Pentium. After finally getting my hands on a 30-series RTX card, I popped that sucker into a slightly modified IBM Aptiva case, along with a new mobo, an i5 9600k processor, and 16GB of ram. Significantly higher specs than what used to be contained in the 1997 computer case. It was originally home to a machine designed for Windows 95, which was powered by a Pentium II.

Even the floppy drive is functional with the help from a floppy drive to USB adapter. On the back of the chassis is a hole that was used for a weird network adapter thing on the old machine. The now-unused opening was perfect for the adapter's USB cable to feed through and plug into the back of my PC. The best way would have been to cut the USB plug and solder the wires onto a motherboard-style USB connector, but that sounded like extra work and the way I'm doing it is functionally fine.

It's fun to find floppies in the wild and see what's on them. Most of the time it's documents, but the fun stuff is photos and software. I don't do anything malicious with the data. It's fun to put together a story based on the floppy's contents. One of these days I'll have to document the stories I've uncovered, minus the personal information of course. I've seen things from late-80s presentation software to vintage adult-friend-finder scam emails from like 2001.

I currently have Windows 10 installed, but I plan to set up a dual-boot with Linux Mint. Windows 11 looks like dogshit assfuck poopycaca, so I aim to eventually transition to Linux entirely. Complete personalization with way less bloatware sounds mega awesome. 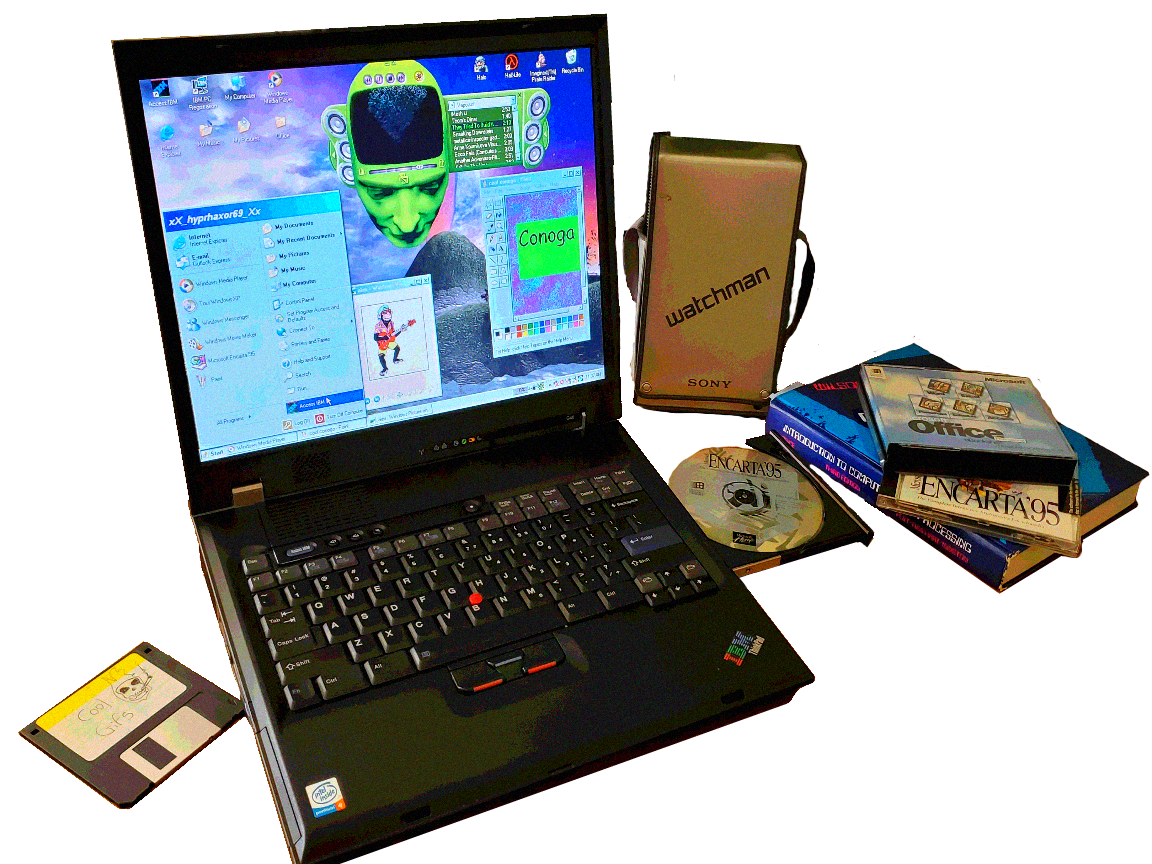 This is the latest addition to my cyberspace arsenal: The IBM Thinkpad G40. Installed on this 2004 "portable" device is Windows XP SP3, and it still runs like a champ. It's nearly 20-year-old battery holds no charge, so it always remains plugged into the wall.

What use does one have for such an old machine? I primarily use it for writing documents in Word 95 and for running old games on actual hardware. It runs Half Life 1 surprisingly well. Of course, it has no touchpad. It only has the little red trackpoint nipple in the middle of the keyboard. I didn't think I'd like it that much, but I've gotten pretty accustomed to it. It's rough for most games though, so I do plug in a mouse for gaming.

I want to take it apart and fully detail clean it. It's fine on the outside, but I'm sure it's real dusty on the inside. It most likely needs new thermal paste as well. The old ass HDD still works really well, but who knows for how much longer. I want to upgrade it to an SSD at some point. New battery would be sick, but there's no way I'll find one at a good price. Connecting to the modern internet wirelessly would be sick as well. I can connect to some sites over a wired connection, but 99% of sites don't like whatever old version of internet explorer I'm using.

The vibes are immaculate with this one. Custom Windows XP themes, crazy media player skins, and the thick outer shell are so cool.