In its current form, Conoga is just me. I am a 21 year old goblin-like creature who hails from the state of Oregon. I developed this site, and created the software and games which bear the name. The name "Conoga" stands for COmmunication (with the) aNOmaly GAmes. A bit of a stretch for sure, but I really liked how "Conoga" looked and sounded, so I made it work. Not to be confused with Canoga park in California. I really hope it doesn't mean anything offensive somewhere.

On a side note, my pronunciation for "Conoga" goes like this: Coh (Like Coworker), No (Like saying No), and Guh (like Gunslinger). While this is how I've been pronouncing my name, it's more up to whoever is saying it.

What does a Conoga do?

I like to program games and software, and this site will act as a sort of portfolio for them. I started getting into HTML and CSS earlier this year, which has resulted in this site. I've always been a fan of the old internet's aesthetic, and this site has been my place to express my love for it.

When I'm not programming or participating in the real world, I'm usually playing video games for inspiration and for, of course, entertainment. The "GameChat" portion of this site is where I write psuedo-game-reviews. It's basically where I gush about the games that I've been playing.

Besides the nerdy shit mentioned above, here are some other things that I enjoy or dabble in:

Some styles and general things I'm into are vaporwave, city-pop, retro-futurism, outdated electronics, and video games.

Some of my most recent escapades include watching old VHS TV-recordings, exploring discarded thrift-store floppies, and fixing a Sega Saturn.

This is my current PC setup: 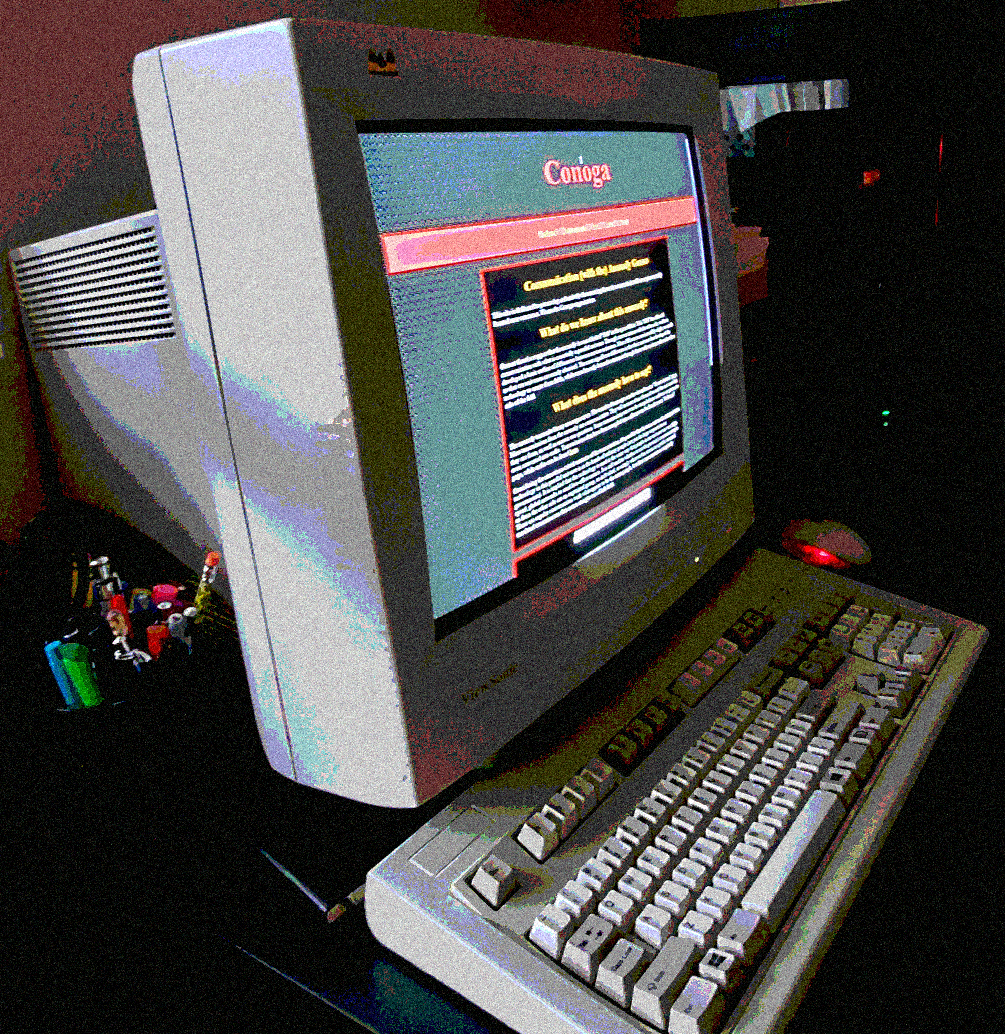 My PC was built in 2017, and it was mid-range then. I plugged a 1050ti into it back in 2019 so that I could play Modern Warfare, but it might be time for an upgrade again soon. The chunky CRT monitor is a Viewsonic E790 built in March of 1999, with a native resolution of 1280x1024. Most games seem to work on it so far with hardly any issues. Retro-style platformers like Sonic Mania look incredible on it. I love the aesthetic of the it. The matching keyboard is a unicomp keyboard, which is a mechanical keyboard manufactured from the same molds as the old IBM Model M keyboards. Sadly, I don't have a beige computer chassis to match everything else (yet).

Here's some stuff that I've been listening to while programming lately:

Esc Realm is another cool sound-plug if you dig vaporwave. Plus, it's a local neighborhood radio station located right here on Neocities! IT EVEN HAS A MASTER SYSTEM EMULATOR!

Want to send hate-mail? Direct your furious typing in this direction: conoga@protonmail.com!